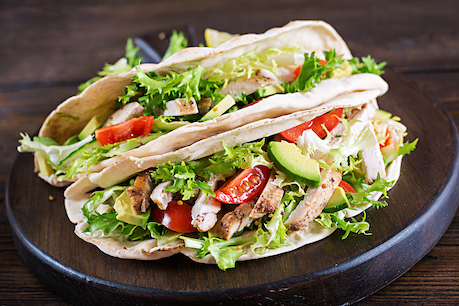 THE FANTASTIC HISTORY OF TACOS!

Tacos are one of the best recipes that we all know and love! You can find various kinds of tacos. With meat, chicken, or veggies. Whatever your choice is, tacos are always tasty and unique! But have you ever wondered about the history behind that gorgeous recipe? Today, let’s talk about the Mexican beauty, the Tacos!

Nowadays, tacos are popular all over the world but their origin is in Mexico. Nearly 100 years ago the ancient Mexicans found this recipe by using a little bit different ingredients. They have used corn tortillas and filled them with fish or cooked organs. Over time it became their traditional meal and spread all over the world.

Now let’s explain the name “Taco”. It comes from the 18th century of Mexico. Those days, gunpowder was covered in a paper called “taquito” and inserted into stones before being shot. Taco was a meal of the working class. And everyone was calling it “tacos de minero“, which means “miner’s tacos”.

1905 was the first time that the taco was discovered by the Americans. Mexican workers migrated to America and brought the taco recipe with them. American workers tried the tacos and started to spread them quickly. Right after, America started to export the tacos and add the recipe to their restaurant menus. The first restaurant chain appeared in Los Angeles and was run by a woman called “chili queens”.

Tacos have a huge history. From Mexico to the world, it is amazing, isn’t it?

Now, you can make Mexican tacos with our Turka tortilla. It’s very simple and delicious! You can find tacos recipes on our Recipe page.

We use cookies on our website to give you the most relevant experience by remembering your preferences and repeat visits. By clicking “Accept All”, you consent to the use of ALL the cookies. However, you may visit "Cookie Settings" to provide a controlled consent.
Cookie SettingsAccept All
Manage consent

This website uses cookies to improve your experience while you navigate through the website. Out of these, the cookies that are categorized as necessary are stored on your browser as they are essential for the working of basic functionalities of the website. We also use third-party cookies that help us analyze and understand how you use this website. These cookies will be stored in your browser only with your consent. You also have the option to opt-out of these cookies. But opting out of some of these cookies may affect your browsing experience.
Necessary Always Enabled
Necessary cookies are absolutely essential for the website to function properly. These cookies ensure basic functionalities and security features of the website, anonymously.
Functional
Functional cookies help to perform certain functionalities like sharing the content of the website on social media platforms, collect feedbacks, and other third-party features.
Performance
Performance cookies are used to understand and analyze the key performance indexes of the website which helps in delivering a better user experience for the visitors.
Analytics
Analytical cookies are used to understand how visitors interact with the website. These cookies help provide information on metrics the number of visitors, bounce rate, traffic source, etc.
Advertisement
Advertisement cookies are used to provide visitors with relevant ads and marketing campaigns. These cookies track visitors across websites and collect information to provide customized ads.
Others
Other uncategorized cookies are those that are being analyzed and have not been classified into a category as yet.
SAVE & ACCEPT